Scottish Borders Council is a local authority providing public services in the Scottish Borders, an area of 1800 square miles (4700 km2), stretching from the English border in the south to the outskirts of Edinburgh in the north and from the Tweedsmuir Hills in the west to the North Sea in the east. It is one of 23 local authorities accredited by Living Wage Scotland.

As a local authority, the Council provides a varied range of services to the 114,050 Borders residents including Schools and Education, Children’s and Families’ Services, Adult Social Care, Community Justice, Homelessness Services, Waste Services, Parks & Environment, and Administration of Benefits. It is also involved in several regeneration and investment projects, including the Borderlands Inclusive Growth Deal and the Edinburgh & Southeast Scotland City Region Deal.

The Council has approximately 4900 employees. About 75% of the workforce is female, with the largest age group, 45% of employees, in the 45 -59 category. Alongside NHS Borders, who became accredited in September 2021, they are the largest employer in the Scottish Borders area.

Iain Davidson, Employee Relations Manager for Scottish Borders Council, stated that a key part of the Scottish Borders Council’s commitment to “improving the quality of life of Borders citizens, empowering communities and creating a thriving economy, with opportunities for everyone is paying the real Living Wage.” This is the only wage that is calculated based on the cost of living.

The Council decided to pursue Living Wage accreditation for two main reasons. Firstly, a number of suppliers utilised by the Council did not pay the Living Wage and the Council wanted to address this. Secondly, the Council recognised that as a large employer in the Scottish Borders area they could provide an example to other employers by becoming accredited.

They held some exploratory meetings of the idea and then authorisation was given at a full Council meeting on 16th May 2019 to commence discussions with suppliers with a view to applying for accreditation as a Living Wage Employer.

‘In scope’ contracts are those which involve regular work on Council premises, property or land. (“Regularly” is defined as 2 or more hours of work in any given day in a week, for 8 or more consecutive weeks in a year.)

However, it became clear that a wide definition had to be given to “Council premises, property or land”. This meant that it included contracts delivered on behalf of the Council on other premises, for example providing care in a service user’s home, early years childcare or working on other sites such as roadworks.

A list of suppliers who met these criteria was prepared by the Council’s Commercial & Commissioned Services team, and it was established that all social care and early years providers paid the real Living Wage to the relevant staff.

Contact was made with other suppliers numbering 90 in total. While a number already paid the real Living Wage, negotiations took place with several who did not. Consequently, over 40 employees across these suppliers received an uplift. To gain accreditation the Council worked with Living Wage Scotland to draw up a set of achievable milestones for implementing the real Living Wage across all ‘in-scope contracts.

Following these negotiations, the application was made, and accreditation obtained. The process was made straightforward by the assistance of Living Wage Scotland who provided help and advice throughout this period.

The Council, through its procurement processes, has now adopted the new Scottish Government Fair Work First policy and applies fair work criteria, where it is relevant to do so, to contracts being awarded by the Council. This new policy asks employers to adopt fair working practices across the five areas noted below: 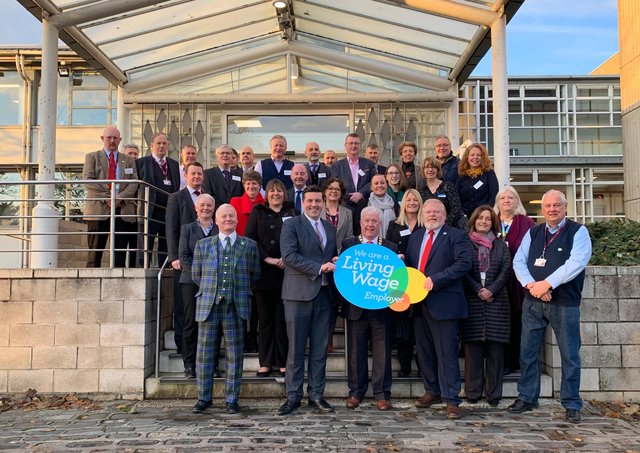 The Council’s accreditation was formally announced by Jamie Hepburn, MSP, Minister for Business, Fair Work and Skills, at a Business Breakfast held on 13th November 2019 to celebrate Living Wage Week.

The breakfast was chaired by Councillor Robin Tatler, who also chaired the Living Wage Group, and attended by several other elected members, Council officers, trade union representatives and representatives of partner organisations.

The news of the accreditation, and the event itself, was covered across the Council’s social media channels and within the local media.

“The Living Wage means that, working in a school as a cleaner, you don’t have to work a second job to make ends meet”

In 2021, the Scottish Borders Council were nominated in the Local Champion category at the Living Wage Scotland Awards. This recognised the work that the local authority has done in the Borders area as a large employer and the example they have set to employers in the area to commit to paying their employees a fair day’s wage for a hard day’s work.

In September 2021, Scottish Borders Council alongside an alliance of prominent local Living Wage employers in the Eildon area of the Scottish Borders launched an action plan setting out how they will work to ‘Make Eildon a Living Wage Place’. The action group is chaired by Cllr Andy Anderson, elected member for Galashiels and District, and aims to double the number of for Living Wage employers in the area within the first 12 months.

You can access a pdf version of SBC’s profile here