WSZ Joiners Limited are based in the Scottish Borders town of Galashiels and have been an accredited employer since 2019. They are a general joiner & building services contractor catering for private and commercial customers in the central Borders area. They also carry out Property Maintenance works for Scottish Borders Council, NHS Borders, Eildon Housing, Trust Housing Association and Hanover Housing Association. They supply landlord services, from property maintenance to damp control for CKD Galbraith, Cullen & Kilshaw Solicitors, Pike & Chapman Solicitors and many private landlords.

Established in 1988 and incorporated in 2012, they are a locally respected company that has built a reputation for Quality, Reliability and Service. They pride themselves on using local suppliers and associated trades, assisting the local economy. They are members of the Scottish Building Employers Federation, ConstructionLine, The Federation of Small Businesses and are a SEPA Registered Waste Carrier.

Operating from their fully equipped workshop in Galashiels, they offer a full range of Joiner & Building Services. Employing their own plasterers and a network of trusted sub-contractors allows them to provide a full ‘All Trades’ service.

Including two company directors they currently have eleven employees. They have six tradesmen (four joiners, one plasterer and one preservation technician), two apprentices (one joiner and one plasterer) and a part time office manager.

WSZ Joiners first learnt about Living Wage accreditation when they in the process of employing a clerical assistant in October 2018. They wanted to ensure they paid a fair rate for the role and contacted Living Wage Scotland who provided information on the current Living Wage rate and accreditation. 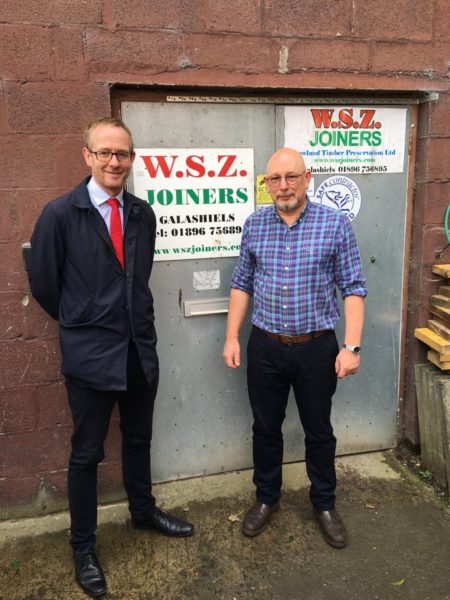 “The Borders has, for as long as I can remember, always had the stigma of being a low paid area. This was something we as a company wanted to distance ourselves from and this was another factor as to why we decided to join the Living Wage movement.”

Prior to applying, they ensured that none of their employees were receiving less than the Real Living Wage rate. They had one employee who was slightly below the real Living Wage rate and they increased his rate, taking his hourly rate above the rLW rate. They said that they found the application was straight forward and achieved their accreditation on the 11th of July, 2019.

They received their wall plaque soon after and they “have this proudly displayed on [their] office wall. They included the Living Wage logo on their Website and announced they were members on their company Facebook page. They received a visit from local MP John Lamont, who was keen to find out more about them and why they had chosen to join the foundation.

In September 2019, they joined an alliance of prominent local Living Wage employers in the Eildon area of the Scottish Borders in launching an action plan setting out how they will work together on “Making Eildon a Living Wage Place”.

Impact on the company

With one employee receiving a pay increase, the employee was happy to be receiving the real Living Wage . Their new recruit in the office was also delighted with the rate of pay they offered her and she told them that this was far more than she had anticipated.

On the benefits of Living Wage Accreditation to their business, Bill Zawadeckyj said

“We feel we have benefited as a company and being able to promote our membership to our customers can only have a positive outcome. While we may only be a small employer, it is important to us that we can contribute in some way to getting all employees in the Borders on a real Living Wage. “

You can download a pdf version of this profile here.